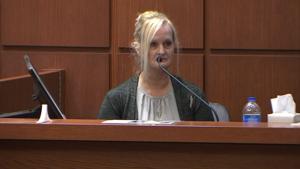 On Thursday, jurors also heard from the mother of Jessica Runions.

Jamie Runions described how difficult it was when her daughter stopped returning texts and phone calls. Then she described Jessica’s family’s constant searches for her.

“It was the longest seven months of my life,” Jamie Runions said. “Myself and Jessica’s dad searched every chance we could get.”

After Yust was arrested and accused of setting Jessica Runions’ vehicle on fire. Yust called his mother from the Jackson County Detention Center in 2016. His jail booking photo appeared to show scratches and burns on his face.

Yust and his mother’s conversation quickly escalated into an argument.

Yust told his mother she was a bad mother who abandoned him with a dangerous man.

In the recording his mother said, “Why don’t you tell me where Jessica is at so her family can have her?”

Yust then accused his mother of being partly responsible for his actions.

In the recorded exchange, Yust said, “So all those times in the front window of my house waiting for you to come pick me up with a backpack full of clothes for the weekend and you didn’t show up that’s my grandpa’s fault?”

His mother responded, “So that’s why you go out and kill a girl? Then Yust replied, “That’s part of it.”

His mother said, “Give me a break. That’s part of it. That’s why you did it?”

His mother then asked him “if he killed Kara too.”

Yust said, “You know I’m going to talk to a lawyer today mom.” Eventually in the exchange, Yust called his mother an expletive and she said, “You know what, bye.” Then the call hung up.

Jurors heard a second call from jail from Yust to his mother apologizing saying he said what he said out of spite and anger.

“The fact of the matter is I didn’t do anything,” Yust said. “Everything I said I take back.”

Earlier in the day, jurors heard a separate 2011 recording of Yust and his former girlfriend Katelynn Farris who wore a wire at the request of the FBI. Jurors heard what was said after they used a Ouija board to “communicate with Kara’s spirit.”

In the recording, Yust said, “Dude, I’m sad because I expletive killed her and left her out in the wilderness alone for her spirit to just roam the forest.”